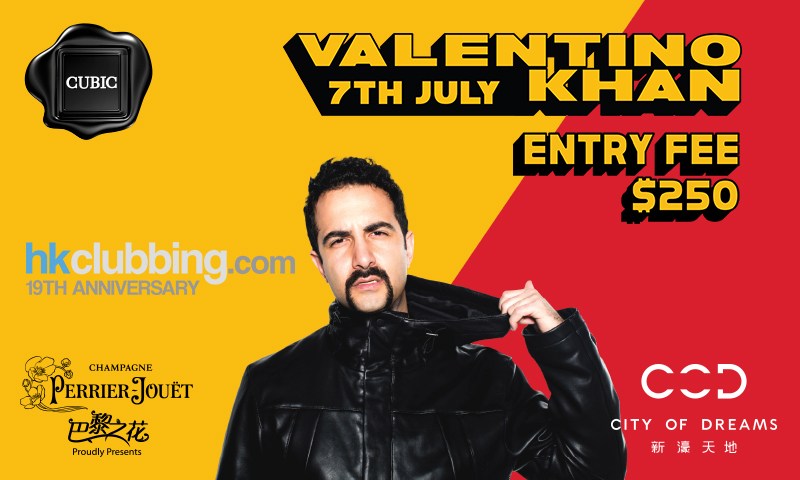 hkclubbing.com, Hong Kong and Macau’s Nightlife Guide is celebrating its 19th Anniversary by bringing the always exciting Valentino Khan to Club Cubic, Macau for the first time ever on the 7th July 2018.

Valentino Khan has gained the support of artists like Diplo, Skrillex, Calvin Harris and many more noteworthy musicians. In 2015, he produced his original song “Deep Down Low” which recently was named as “Most played track by DJ’s in 2015” by 1001 Tracklists and Sirius XM Radio’s Number 1 Song of 2015 on Atomic Area.

Valentino has shown a unique versatility in dance music — progressive house, techno, electro, hardstyle, trap, and more. He has also established himself as one of the most in-demand remixers, with official remixes for artists such as Skrillex, Dillon Francis, Flosstradamus, Wiz Khalifa, M.I.A., Zeds Dead, The Bloody Beetroots, Paul McCartney, Bro Safari and many more!

Having released his super hit Deep Down Low with 31 Million views on YouTube, followed by live sets at EDC Las Vegas 2017, Ultra Miami 2018, and his latest release Lick It, Valentino’s future is only getting more and more exciting!

RSVP: +853 66384999 or This email address is being protected from spambots. You need JavaScript enabled to view it.

Find out more about Valentino Khan:

Visit www.hkclubbing.com to find out more about Hong Kong and Macau’s Nightlife Guide and the chance to get a limited guest list place on the night!